Trail Runner Magazine feature about us!

Posted on December 21, 2014 by administracio

Our guide from Running Costa Brava Tours, Pablo Rodriguez, is easily recognizable in the Girona’s bustling train terminal. Not because I’ve met him before or seen his photo; rather, I recognize him in the way a runner recognizes another runner. Pablo is wearing a crimson hydration vest over a well-worn, sweatstained technical T-shirt with grey shorts, his sockless feet in pancake-flat yellow running shoes that scream running geek. His bald head shines as brightly as his eyes when we make visual contact. He bounds towards me, deer-like, with a light and springy gait. “Welcome to Catalunya!” he says. Photographer Chris Hunter and I are spending the next four days with Pablo for a fully supported Catalonia trail-running tour of Costa Brava’s ancient villages, spas and wineries between Girona and the French border at the Pyrenees…

Posted on November 7, 2014 by administracio 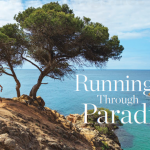 After traveling to Spain for a running vacation, I discovered that spending a few days following the Costa Brava Way Trail doesn’t just meet these lofty desires—it surpasses them on every level. Maybe it was the peeding through ancient towns … Continue reading →

National Geographic Adventure feature about us. 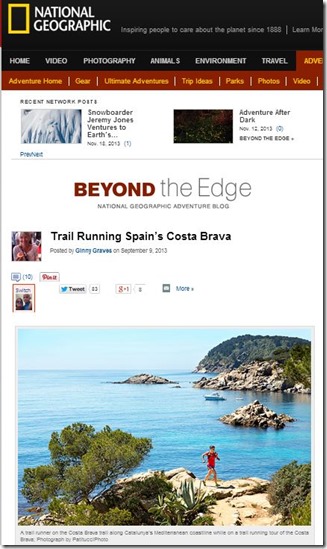 By the time I reached the apex of a near-vertical rocky path, I’d been running for more than two hours. I had sweat dripping from my chin, blood oozing from my elbow and knee—courtesy of a hidden tree root—and dark thoughts crawling through my mind. (This is vacation???) And then, just like that, from one punishing footfall to the next, I attained the ridge … and everything changed. Before me lay the vast cerulean carpet of the Mediterranean, under my feet a rocky promontory ornamented at its point with a lone cypress. Spielberg himself couldn’t have designed anything more cinematic. “Nice, right?” grinned Pablo Rodriguez, a boyish, fleet-footed 35-year-old.Rodriguez owns Running and Outdoors Costa Brava, one of an up-and-coming breed of active touring companies that is gaining traction among those who prefer to take in the sites at something close to race pace—and the reason my husband, Gordon, and I (and a group of similarly avid runners) were standing, slack-jawed and bedazzled, atop a cliff in Catalonia, a fiercely autonomous region in the northeastern corner of Spain. The five-day tour along the spectacular Costa Brava, or “wild coast,” included more than 50 miles of running on everything from gentle forested paths to steep, technical single-tracks; half a dozen visits to Medieval castles and cathedrals; thousands of exquisite calories (Catalonia is a gastronome’s fantasy), four overnights in moderate- to high-end hotels—and dozens of surprises, Rodriguez’s specialty…http://adventureblog.nationalgeographic.com/2013/09/09/trail-running-spains-costa-brava/

END_OF_DOCUMENT_TOKEN_TO_BE_REPLACED

Metro Newspaper feature about us. 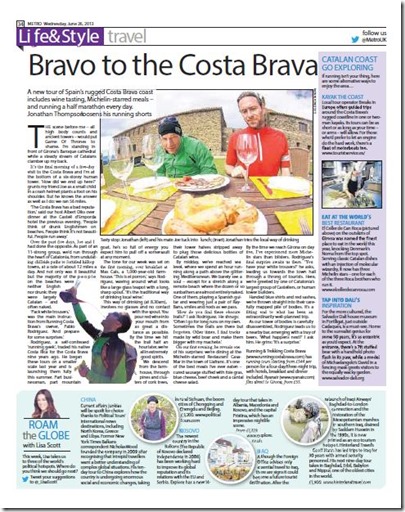 The scene before me – all high body counts and ancient towers – would put Game Of Thrones to shame. I’m standing in front of Girona’s Baroque cathedral while a steady stream of Catalans clamber up my back.It’s the final morning of a five-day visit to the Costa Brava and I’m at the bottom of a six-storey human tower. ‘How did we end up here?’ grunts my friend Joe as a small child in a crash helmet plants a foot on his shoulder. But he knows the answer as well as I do: we ran 56 miles. … ‘And prepare for some surprises.’ Rodriguez, a self-confessed ‘running geek’, traded his native Costa Rica for the Costa Brava nine years ago.He began these tours on a smaller scale last  year and is launching them fully this summer. Part businessman, part mountain goat, he’s so full of energy you expect him to pull off a somersault at any moment.‘The Costa Brava has a bad reputation,’ said our host Albert Diks over dinner at the Castell d’Emporda hotel the previous evening. ‘People think of drunk Englishmen on beaches…

END_OF_DOCUMENT_TOKEN_TO_BE_REPLACED

Pablo and Cristina are the founders and managers of running&outdoors Costa Brava. They live in Girona with their four little boys. After working for some years in their formal jobs, Pablo as a IT specialist and Cristina in a travel agency, they finally decided to quit their jobs and make their passion their way of living.

A mix of experience and knowledgement from both, allowed them to create running and trekking CostaBrava first, and since 2013, Running&Outdoors Costa Brava as a result of offering more experiences.Pablo was an ex professional triathlete and Cristina always dedicated professionally to the tourist world.

He is in charge of the route design and the other guides supervision and trainning. Cristina is the contact before your arrival. She is in charge with all the bookings and will personally sort out all the matters conecerned to your stay.

They have really created a new concept of vacations, letting their clients to know their country, Catalonia and its villages with outdoors experiences like running, treking, biking or kayaking. Enjoy the worldwibe knowed Costa Brava and its gastronomy without worring about a single thing. They will give you the chance of revel la Costa Brava as just just few people have, through almost inaccessible and awesome places.